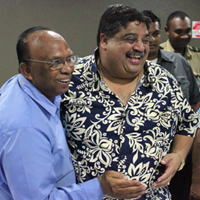 Businessman Rajesh Patel is the new president of the Fiji Football Association.

Patel received a total of 43 votes while Shailendra Prasad only got 10 votes.

But the presidential election got off to a bad start at the new Fiji FA headquarters when Fiji FA chief executive Bob Kumar told all the delegates that Shailendra Prasad was not eligible to contest as his nominations were filled by the secondary schools soccer association.

According to Kumar, the secondary schools soccer association has limited powers and it cannot nominate someone in the presidential election.

This led to a heated argument where Shailendra Prasad questioned the Fiji FA executives as to why he was not told about this earlier.

This lasted for a while with Prasad’s candidates joining in the debate.

We witnessed this from outside as the media was not allowed in during the elections.

Rajesh Patel then stepped in and announced that the election should go ahead and he will contest the election despite the issues raised about Prasad’s nomination.

For 26 years, Dr Shamshud Dean Sahu Khan was running the show at Fiji FA House but the reins have changed and hopes are high that Patel will deliver the results which the soccer loving fans have been desperately waiting for.

Patel confirmed he wants to sit in office for a longer term.

Patel added there are a lot of things that needs to be done in Fiji soccer and he will have a board meeting soon.

\Viliame Vodonaivalu has been appointed as the new CEO of FNPF. FNPF Board Chairman Daksesh Patel says the Board is confident that Vodonaivalu’s ... 54 minutes ago