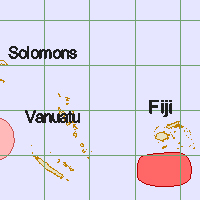 A strong wind warning remains in force for all Fiji land areas.

The latest weather report from the Nadi weather office said the earlier second tropical depression that was situated to the west of Vanuatu has now turned into a tropical cyclone.

Tropical Cyclone Jasmine is slowly moving east and its indirect effects are expected to be felt by Western parts of Fiji by Wednesday.

For the first Tropical Depression to the south of Fiji, it is moving east southeast and expected to lie to the southeast of the country later tomorrow.

Periods of rain heavy at times and squally thunderstorms with flooding of low lying areas.

People are being advised to take necessary precautions now.

Meanwhile looking at some parts of Fiji.

Kadavu is experiencing strong winds and heavy rainfall this hour.

Vunisea Police Station said that students of Vunisea Secondary boarders have been centralized to their dining hall for safety reasons as they face adverse weather conditions.

In Rakiraki, strong gusty winds have been experienced there this morning.

Heavy rain that has now eased forced two families to move to higher ground in Nadovi due to flooding of their homes.

Rakiraki town is cordoned off at the moment and this is being done as a precautionary measure.

In Tavua, strong winds are also being experienced there with rain easing however resident in the area are facing water disruptions.

The Tavua Community Hall that is being used as an evacuation centre currently has 33 adults 21 children.

Meanwhile power supply to Nadarivatu is being affected and this is reportedly attributed to a fallen tree on a power line.

Meanwhile, Ba Special Administartor said they are experiencing occasional rain but they are expecting a drastic change in the situation later this afternoon based on the weather forecast.

Prasad added the evacuation centers are activated in the villages but not in the town area.

In Nadi strong winds have now died and rainfall has eased.

For Sigatoka, strong winds and rainfall has eased as well.

It’s still cloudy and more periods of rainfall is expected in the afternoon.