Fiji appears before US subcommittee

Fiji appears before US subcommittee 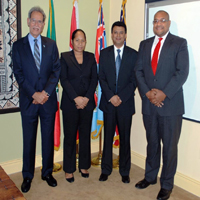 The government has been given three weeks to present post hearing written submissions after discussions in Washington DC today on the duty free access scheme for 39 Fijian companies exporting products to the US.

The delegation was led by Acting Solicitor General Sharvada Sharma as he made a presentation on developments in Fiji to the Generalized System of Preferences subcommittee after a petition to the US seeking to remove Fiji from the duty free access scheme.

Sharma informed the subcommittee that the intention of the Essential National Industries Decree is to ensure the viability of specific industries that are vital to the Fijian economy.

He said the decree is designed to protect jobs while safeguarding the fundamental rights of workers.

Sharma stressed to the US subcommittee that the decree does not destroy the trade union movement in Fiji as alleged.

It was also stressed that under the decree, workers continue to have fundamental rights including the right to organize, form unions, independently vote for representatives, bargain collectively and develop processes to resolve employment disputes and grievances.

Sharma informed the subcommittee about the successful implementation of the decree in essential industries where workers have freely organized, formed bargaining units and elected representatives.

The US subcommittee was also updated on the constitutional processes that have been implemented by the government.

Sharvada Sharma said this includes a nationwide dialogue process by an independent Constitution Commission that will result in the promulgation of a new constitution in early 2013 and lead to Fiji’s first non race based democratic elections by September 2014.

The subcommittee was also informed that with the lifting of the Public Emergency Regulation in January this year, Fiji is now operating under the amended Public Order Act.

It was also highlighted that all forms of media censorship have been wholly removed.

If the decision goes against Fiji, then it would stop us from benefitting from the US Generalized System of Preferences (GSP) Scheme and put 15,000 jobs at risk through loss of exports.

Prime Minister Commodore Voreqe Bainimarama said 75,000 people would be indirectly affected through the loss of the scheme.

Fijian Drua vs Chiefs First Half ... 11 minutes ago
LATEST NEWS

A group of people have come from Nadroumai Village in Nadroga to support Swire Shipping Fijian Drua centre Kalaveti Ravouvou against the Chiefs in ... 1 hour ago